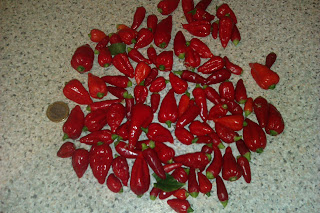 This is the latest batch of chillies that I grew. There is a Euro Coin on the left, just for scale. Some of the chillies are fairly large.

I had just under 200g of Chillies. They were a mixture of Dorset Naga (Ghost) and Super Chillies. The Naga is super hot and the Super ones are also fairly hot. I split them in three and used a third in each recipe.

WARNING: Brefore we go on, I must emphasise that these chillies are very hot and you need to use plastic/rubber gloves when handeling them and any utensils that have been in contact with the chillies. After I made everything, I got something on my hands and they started to burn. Easily washed off, though. Special warning to men. You know what I mean. WASH YOUR HANDS BEFORE YOU TOUCH ANYTHING.

I dried the Chillies in the oven @ 100C for about 40 mins. I started watching them after 15 mins and just kep going until they were dried out.

I blitzed them and boiled them in malt vinegar. This has something to do with changing the ph of the chillies, so that the Botulism bacteria are killed. It is known to br found in chillies.

What was left was fairly dry, so I put it into some Vergin Olive Oil and brought up the temperature. Do not boil.

When it was hot, I put it into a scalded jar. When the mixture had cooled, I topped up the jar woth more Olive Oil.

This was a first for me. I basically followed the recipe on
http://www.guardian.co.uk/lifeandstyle/2010/aug/03/chilli-jam-recipe

I did not use the tomatoes. I used a whole bulb of garlic, jam suger (it contains precin, so bit helps) and about 30 chillies.

Choose the tropical fruit of your choice. I like pineapple.

This time I used a tub of SPC Natures Finest, which contains pineapple, pear and peach in juice. I use the whole tub.

So, dump your fruit into the blitz machine of your choice, add all the chillies, one bulb of garlic, some salt and a good glug of vinegar.

Blitz it until it is the consistancy you like.

Taste and adjust the seasoning, if required.

Plop in a saucepan and bring to the boil. Simmer for a few mins.

Once again, decant into steralised jars.

Here is a picture of the latest family members.

I have named them, from left to right: Mr Chilli Oil, Mrs Chilli Jam and Mad Cousin Chilli Salsa. 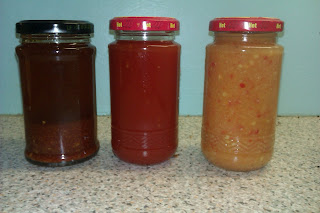 The Chilli Oil is a bit lighter then the picture. You can see the residue at the bottom of the jar.

I tasted it It didn't taste hot initially, but then the heat sort of crept up on me scarred me. It was like a panther creeping up on you. You know it is coming but don't know when it will strike or how much damage it will do. Nice. Love the Burn.

The Chilli Jam was very red. When I blitzed the red peppers the result was a sort of pink but when I put the chillies in, it turned very red.

The taste was quite sweet, which is not a surprise, as it is a jam and has 700g of suger. It is a nice sweet garlicy sauce that gives you a punch in the face. What more can you ask for? Love the Burn.

The Chilli Salsa is a different animal.

It is a little sweet, a little tart but hotter then a blow torch. I dipped a spoon into and tasted whatever clung to the spoon. 10 seconds in, it got hot and kept getting hotter for ablut a minute or two. Then it started to spread to my head. It felt like I put a rubber band around my head and let it compress and pull my hair as it headed towards the back of my head. I know you have done that.

What a rush when the endorphins kicked in. Burn burn burn. Great.

I did not distribute the Naga and Super Chillies equally between the three batches. I just grabbed a handful and measured 60+ grams.

Great result and practically free. The only thing I bought was the Jam Suger.