I have a project on the go which I call Project Doorman aka Carlton. It will involve a Raspberry PI, I2C connections controlling a 1-Wire controller which will be connected to a DS2408 switch. I will use an iButton ID keyfob and sensor i got from http://www.homechip.com a few years ago. So, keybob, open the door and Bob's your auntie.

I wanted to have as much of the electronics mounted on the RPI. I have a Slice of PI by ciseco.co.uk but the prototyping space is too small.

I was also looking at the Adafruit Prototyping Pi Plate Kit for Raspberry Pi but that would cost €20 landed. I was going use it, so all the fancy connectors etc., would end up not being used. Feck that, I said. I know the bits would be used on other projects. A penny saved is a penny to squander.

I read about a fella who was talking about using an Arduino Prototyping Shield on the RPI. That sparked an idea.

In my previous researching/playing with Arduinos, I got Budget Proto Shield (x3) from Oomlaut.com. I had one I hadn't used.

So I desoldered the headers, and soldered one on the other way.

Presto Chango, I had a Cheapo Raspberry PI Prototyping Shield/Plate 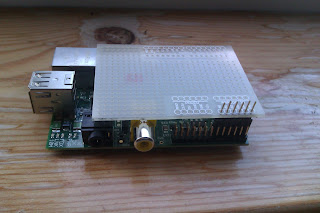 Here is the Protoshield attached.

it only uses a single line header, which provides access to the I2C pins (3 & 5). I also get 3.3V on pin 1. I will also need access to the 5V pin (2) and Ground pin (6). I probably will put a small header piece to accomodate this and solder some pieces of wire and connect it to the Shield. I don't care really, whatever works.

It is a nice size and definately has the real estate I need. 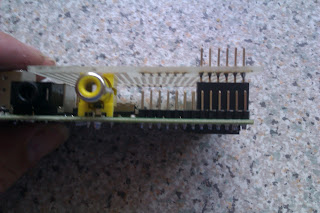 From the side. I used the space to have it fit on top of the other bits of hardware, in this case, the composite video connector. Everything has to be nice, after all. 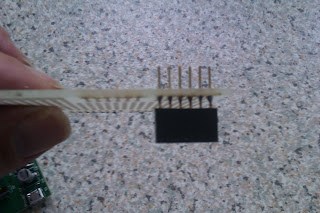 Kist the header from different angles. 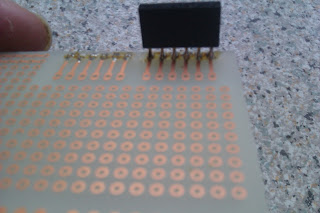 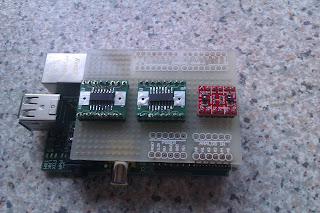 Here we have the major components that will be used for this project. The red guy is a Logic Level Converter I got from CoolComponents.co.uk. Very cheap and useful. It ensures that I only have 3.3V connecting to the RPI.

That is about it. I will probably reorganise the layout to facilitate adding extra components. I might add a couple of light sensors, while I am at it.

So, what are the benefits? Cheap and Useful. I don't really need a prototyping board. It is going strainght into production.
Posted by The G Man at 8:54 AM